Then the same day at evening, being the first day of the week, when the doors were shut where the disciples were assembled for fear of the Jews, came Jesus and stood in the midst, and saith unto them, Peace be unto you.

And when he had so said, he shewed unto them his hands and his side. Then were the disciples glad, when they saw the Lord. 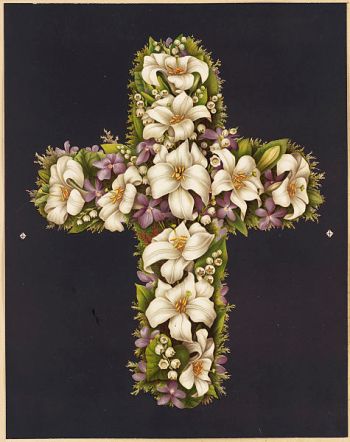 We do not pretend that life is all beauty. We are aware of darkness and sin, of poverty and pain. But we know Jesus has conquered sin and passed through his own pain to the glory of the Resurrection. And we live in the light of his Paschal Mystery – the mystery of his Death and Resurrection. We are an Easter People and Alleluia is our song! 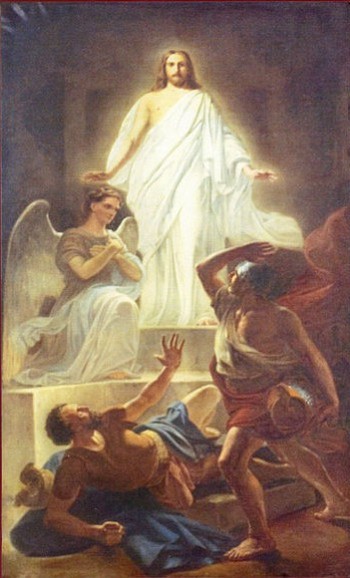 The Lord is Risen!

In the end of the sabbath, as it began to dawn toward the first day of the week, came Mary Magdalene and the other Mary to see the sepulchre. And, behold, there was a great earthquake: for the angel of the Lord descended from heaven, and came and rolled back the stone from the door, and sat upon it. His countenance was like lightning, and his raiment white as snow: And for fear of him the keepers did shake, and became as dead men.

And the angel answered and said unto the women, Fear not ye: for I know that ye seek Jesus, which was crucified.

He is not here: for he is risen, as he said. Come, see the place where the Lord lay.

And go quickly, and tell his disciples that he is risen from the dead; and, behold, he goeth before you into Galilee; there shall ye see him: lo, I have told you.

And they departed quickly from the sepulchre with fear and great joy; and did run to bring his disciples word.

And as they went to tell his disciples, behold, Jesus met them, saying, All hail. And they came and held him by the feet, and worshipped him.

Then said Jesus unto them, Be not afraid.

Saint of the Day:

Pray the Liturgy of the Hours:

Advancing Our Church is a weekly podcast. Click image to visit site:

Pray the Chaplet of the Divine Mercy:

Pray the Sorrowful Mysteries on Tuesday & Friday, (on Sundays during the Lenten Season & Daily during Holy Week)

Pray the Glorious Mysteries on Wednesday & Sunday, (on Easter Sunday & the Sundays during the Easter Season)

Pray the Luminous Mysteries on Thursday

BE BRAVE and BELIEVE!

Remember that you’re not alone,
God loves you.